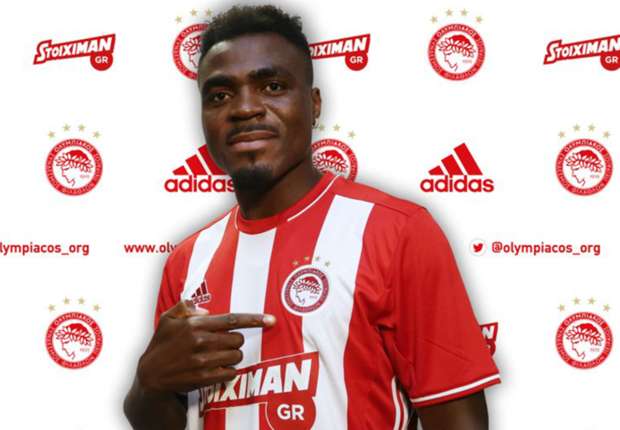 The 30-year old make the switch after weeks of being linked with the club.

The player is expected to earn €2 million annually after agreeing to a two year deal with an option of an extra year. The striker confirmed the deal on Wednesday.

“I want to say to our fans that I’m here. I’m here to play and I will always give my best. When I’m on the field, I will give my best, for the club and for the fans,” the player promised.

Olympiakos are poised to meet Lokeren and AZ Alkmaar before returning on July 16.

Also, the club signed summer interest Mehdi Carcela from Granada. The deal cost the Superleague champs €2.5 million. Three-quarter of the transfer fee would go to Granada while the rest would go to Benfica.

Carcela is the third addition to the Greek outfit in a week, after Tachtsidis and Emenike. The player is expected to feature in the wings this season. The experienced player has featured for Belgium and Russian sides, before his move to Benfica. He excelled at his time in Granada where he was ratedone of the top three successful dribblers in the La Liga. The 28-year old is expected to add to the budding stars at Olympiakos.